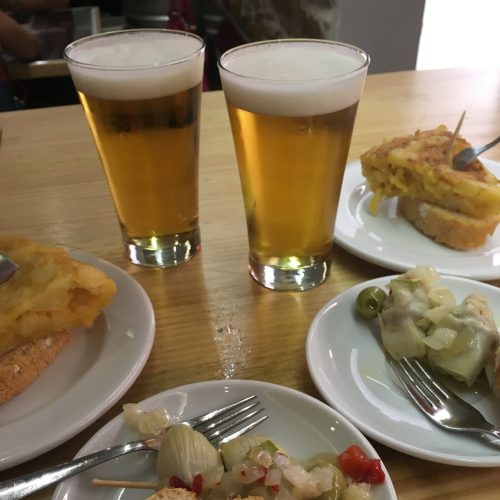 Pintxos are small snacks that are found in the northern (Basque) regions of Spain and are meant to be enjoyed along with a glass of wine, a beer, or any other soft drink. They are kind of like the tapas you can find in Granada, only that you are charged for them and can always choose your snack of choice. The name pintxos is Basque (in Spanish—pinchos) for toothpick or cocktail stick that was originally used to hold something delicious to a piece of bread, although nowadays you can find lots of pintxos without this iconic toothpick.

As they are small, you can either have one or two as a snack or you can take advantage of the small sizes to try a plateful of tasty morsels instead of lunch or dinner. However, remember to follow the etiquette you see in the bar. In some places you will be allowed to choose (as in pick up) your own pintxos where in other places you will served the ones you point out.

Recently on my trip up north to Bilbao, I had a lot of fun trying out a bunch a different restaurants and wanted to share my experience with you, along with some things I find important when decided what pintxos to eat and where. I was with a group of friends, making the experience really fun and would highly recommend planning something similar if you are planning on travelling around or living in Spain.

Note: Keep in mind that this experience was limited to the city of Bilbao and you might have different experiences in other cities. Whatever the happening, make sure to share with us!

Get it anywhere at good value for money: Tortilla de Patatas

If you are super hungry (esmallado* as they would say in Granada), I personally think that a pintxo of tortilla de patatas, or Spanish omelette, is just the ticket. It is usually a decently sized slice of egg and potato pie—with the option to usually have special flavors such as added onion or mushrooms—with a small slice of bread. While it might not count as dinner, it will definitely help you move past your hangry feelings while choosing what you want to eat.

Note: While in Bilbao I did have several pintxos of tortilla de patata. One was a little bit old, but they others were fresh and delicious (as it is such a common treat, they are usually made a couple of times a day). 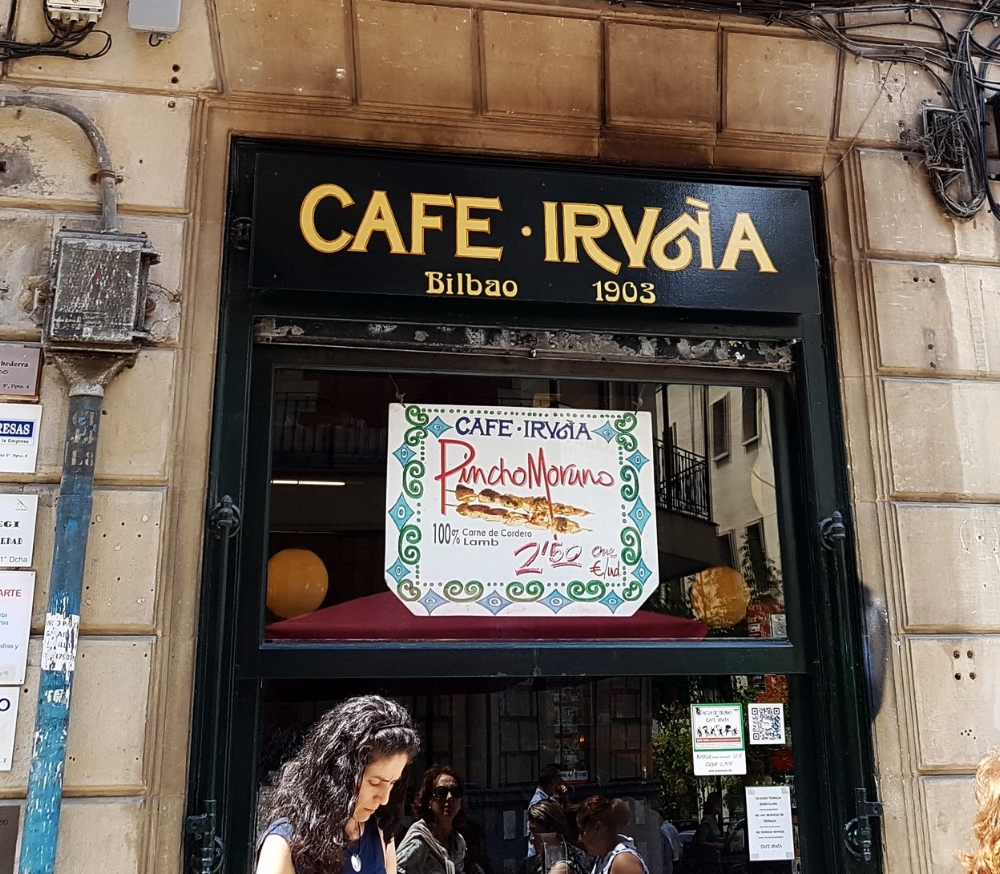 I have now been to Bilbao a handful of times and everyone tends to recommend Cafe Iruña. It is a beautiful old building with classic tiles and traditional pintxos. This was neither the most expensive nor the cheapest place for pintxos in Bilbao, but a happy medium (around 1.85€ per pintxo, plus 2€ for a glass of wine). I would highly recommend coming here if you are looking for a solid experience as you know it will be good, but don’t expect anything otherworldly.

I know that tourist destinations tend to be more expensive and potentially lower quality than other places around the city. However, it is fun to have a drink or two and a pintxo in a place like Plaza Nueva, and I promise you won’t break the bank. Another great thing is that they will cater to more tourist needs—my cousin got a massive glass of delicious sangria here and was delighted because it was exactly what she wanted. In addition, it is a great place to people-watch and soak up the sun.

Treat Yourself and Splurge:

I went to several places that were a little bit more expensive than I expected but one of them stood out in my mind as the pintxos were both incredibly beautiful and delicious. The bar Basque definitely pays attention to detail when comes to their pintxos and my friend and I enjoyed the luxury (at around 4€ a pintxos) for exactly one drink as that is what we felt like we could afford with all our taste-testing. If you have a bit more money that you want to dedicate to the cause, I can definitely imagine spending an afternoon here.

Inexpensive but Delicious (And My Favorite):

Once we got the fancy out of our systems, we decided to check out a place recommended to us by my friend’s Blablacar companion—Bar El Figón. At around 1€ a pintxo this was probably the cheapest place we went and it was still incredibly delicious! If you are a bit picky (and not so adventurous) with your food, I would definitely recommend this place for high quality, but simple Basque food.

If You Want Vegan Pintxos:

This is a shout-out to my amazing vegan cousin who was with us on the trip and ended up not eating as much as she would have liked. Unfortunately, as delicious as Basque food is, this part of the country uses a heavy hand when it comes to animal products. In many places we couldn’t even find enough pintxos to fill my lactose-free stomach much less my cousin’s vegan one. I know I said you can survive as a vegetarian or vegan in Spain (and I still stick by this), but if you want to enjoy cuisine in Bilbao I would recommend getting out your HappyCow app and searching for the nearest vegan place. 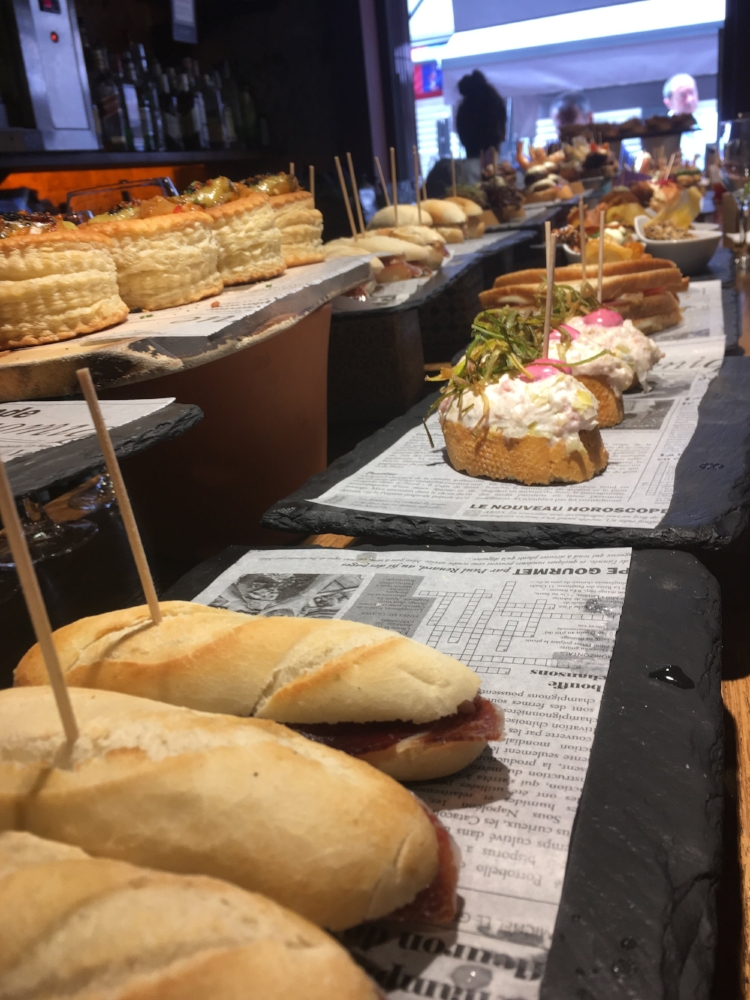 I hope I have inspired you to make it an experience and try one or more of the ideas for pintxos above (the places mentioned really are just symbolic of different ways to eat pintxos). I would also recommend that you try it with a glass of Basque red or white txakoli—the classic wine produced in this region! This last trip was the first time I had had this type of wine and found it deliciously refreshing.

*Esmallado (pronounced esmallao) is a very common word in the Granada and other Andalusian regions. It means to be feeling like you will pass out from hunger. 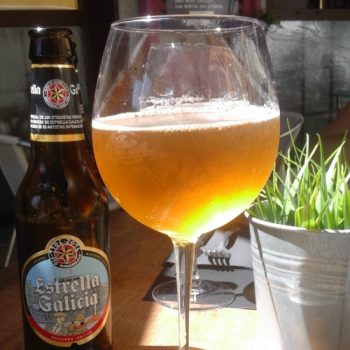 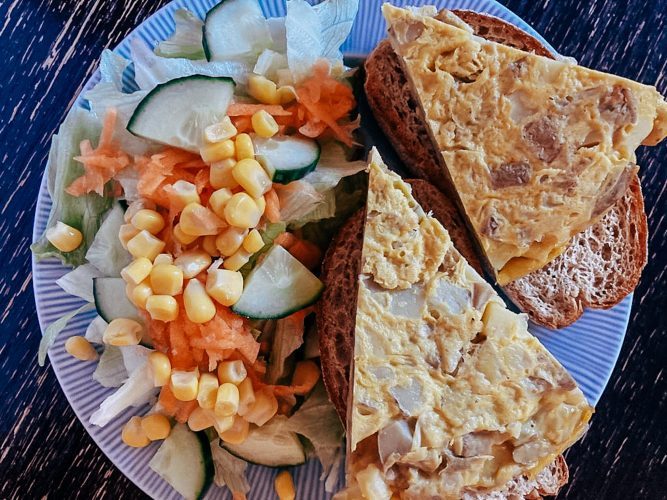 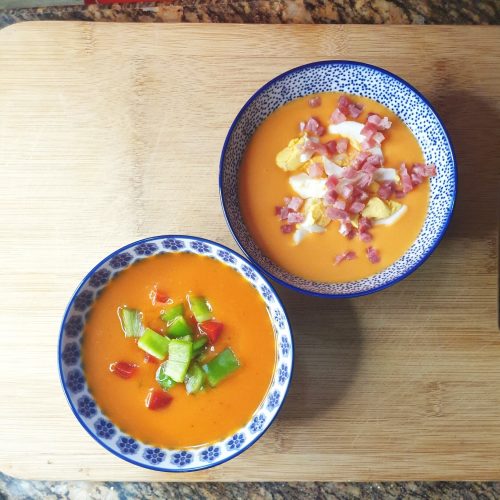 What’s the Difference Between Gazpacho and Salmorejo?