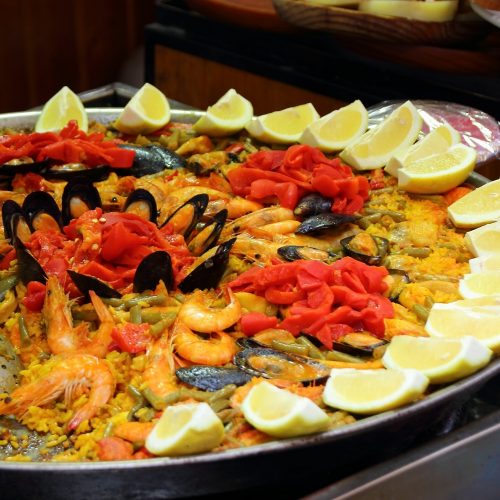 I am not going to pretend that this article is about a recipe that will give you perfect results to make an authentic Spanish paella, instead I want to focus on some key aspects of paella that I have discovered while living in Spain. As someone who was first introduced to paella at a very young age, I have specific memories of flavors and social situations where paella is served. However, like most good things, everyone has their own interpretation of this special dish, so I’m just going to try and give you as much information as I can so that you can make the best choice for how to make best possible paella for yourself and your loved ones. 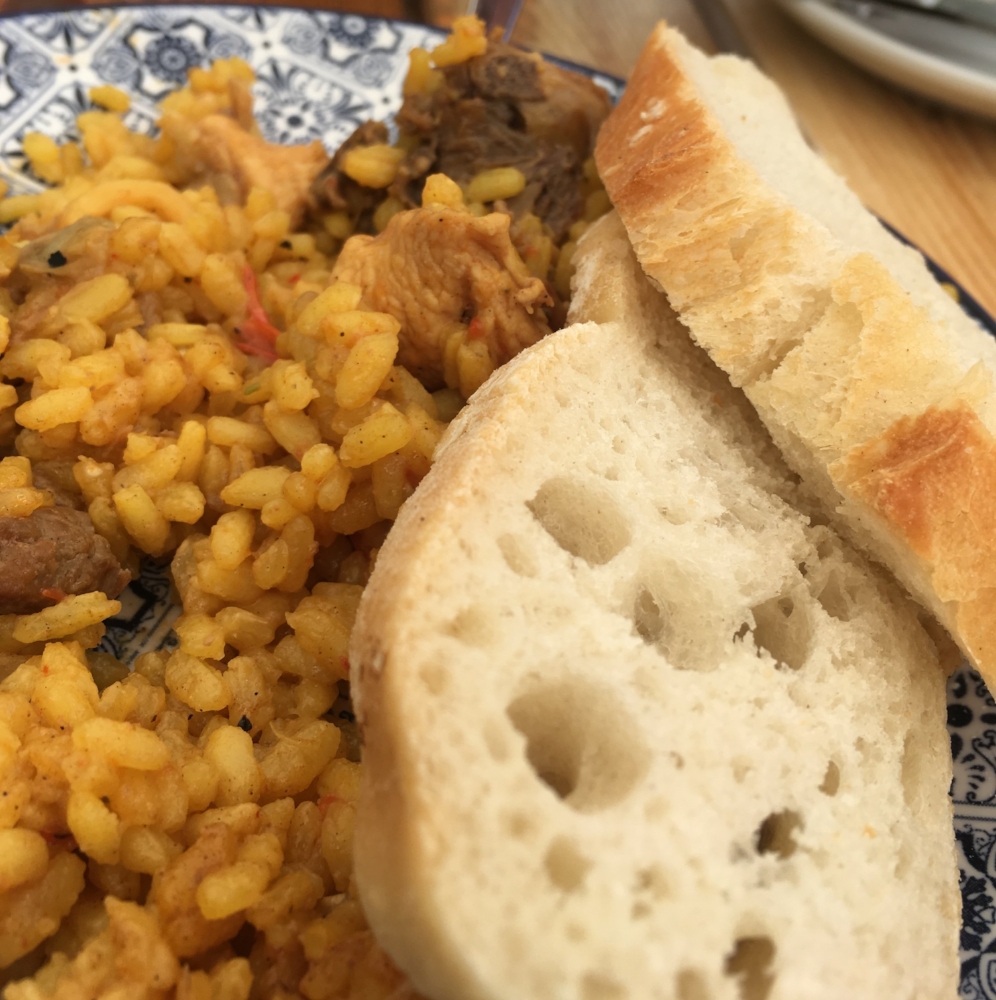 While you may think paella is generally a typical Spanish dish, the origins are from a specific region of Spain—Valencia, concretely the region of Albufera. And the name ‘paella’ actually refers just as much to the pan that the dish is cooked in as the food itself. This is because rice dishes are a common source of sustenance in this part of the country (think inexpensive with good flavor with whatever bits you have lying around) and, in addition to the ingredients, the way paella is cooked differentiates it from other rice dishes.

Note: You can now find paella all over Spain. However, tourists be aware—Spaniards don’t expect you to know what real paella is like, so they might try to feed you something that natives would never consider paella. You have two options: accept it happily as it is probably delicious anyway, or do your research on where to eat authentic paella before heading out.

Grandmothers’ recipes for paella call for a variety of fresh meat and vegetables. A Valencian paella will traditionally have something along the lines of chicken, duck, rabbit, snails, broad beans, tomato, rice, olive oil, water, saffron, and salt. However, you can commonly see options with seafood, chorizo, peppers, peas, stock, etc.

The most important thing when choosing ingredients is that they are fresh and, when possible, as simple as possible. Like in many European countries, Spanish cooking is based on simple flavors that shine when they are fresh. For example, if you are cooking with fresh seafood or meat, make a simple stock by boiling the shrimp heads or bones and use it insted; if you have fresh beans in the garden, don’t be afraid to throw them in.

Personally, I would also make sure to use real saffron (although it is common nowadays to get the well-known yellow color from colorante—a yellow powder you can buy at the store). This flower is not always cheap to get your hands on, but the flavor and color it adds to paella help give this dish a unique touch.

Most importantly, considering it is the base of the dish, make sure to use a short grain rice. Spaniards tend to use bomba rice, a type of rice specifically grown in the Valencian region of Spain. It is used in many different types of rice dishes and absorbs the water or stock you have in your dish while still caramelizing on the bottom of your pan (the socarrat).

Note: The way that every mother, father, and grandparent (and therefore their recipes) measures, prepares, and adds their ingredients is different, so find one that you like and follow along. 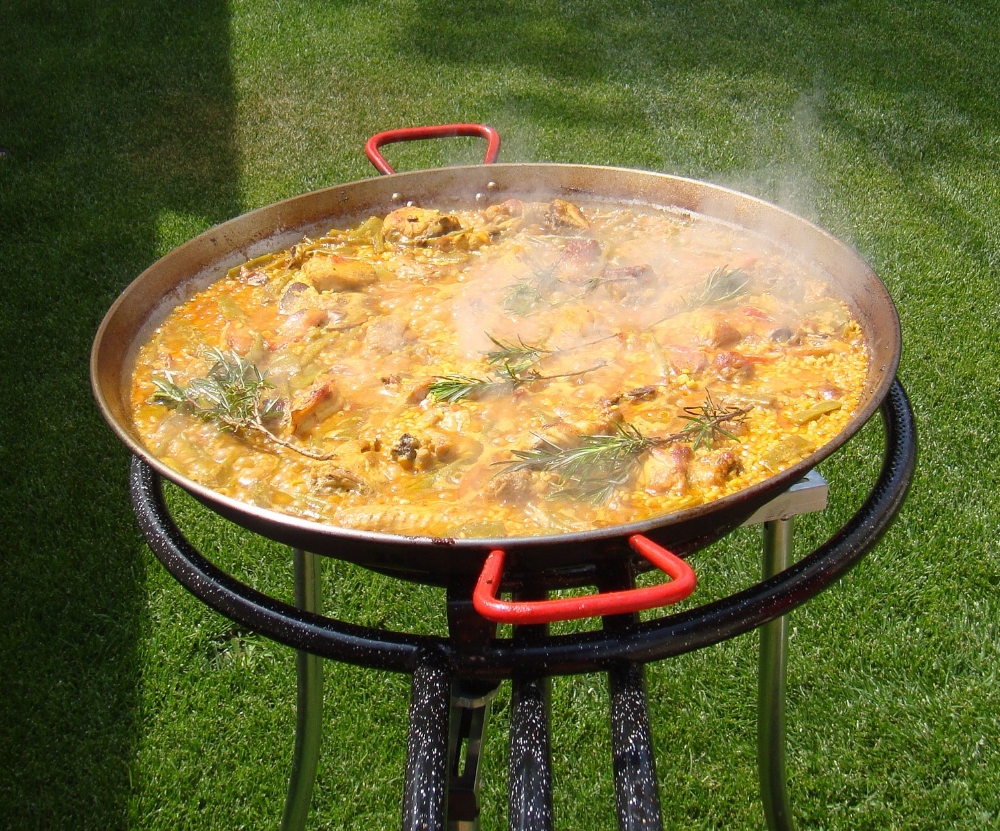 Like previously mentioned, one of the most important parts of making paella is the pan. In fact, I would say that without the special pan, most people would say you are just making a different type of arroz or rice-dish (equally delicious, perhaps, but not paella). The correct paella pan is a flat, wide pan, usually made out of iron or steel with two small handles on either side. The shape of the pan allows for the quick evaporation of liquid that is added, leaving behind both a layer of socarrat and perfectly cooked rice, without burning.

In addition, most Spaniards would agree that paella should be made over a flame when possible. While making a fire is not an everyday occurrence, many Spaniards still have gas stoves and, if not, there is a solution for that as well—a butano, or a gas can, with a ring fixture on top. This type of setup also helps with the heat distribution, contributing to the perfect cooking.

Note: I once got into a discussion with a waiter who insisted on telling me that a dish was “paella style” with different flavors but, like any good non-Spaniard-Spaniard, I told him very seriously that it it wasn’t made in the proper pan, it wasn’t actually paella.

A Sunday lunch or a casual meal:

Finally, it is good to remember that the majority of people in Spain are as happy to eat paella for Sunday lunch as they are for a casual midday meal. Families will decide on the ingredients and quantities for their paellas depending on who, what, when, where, and why. I know people who like to make massive paellas for parties (which is what I grew up with) and others who are happy to have it for a normal weekday meal—and everything in between. The beautiful thing about paella is, because it is a way of cooking the rice more than the specific ingredients, it can be dressed up or down as you like.

Note: You should also be aware that this is a dish Spaniards will make during the day, not in the evening, so don’t be surprised if the waiter laughs at you for trying to order it for dinner (or they do serve it to you, but it takes an hour to arrive because they are not generally preparing paella at that time).

What do you think? Do you like paella? Let us know! 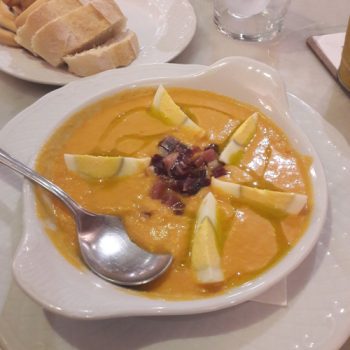 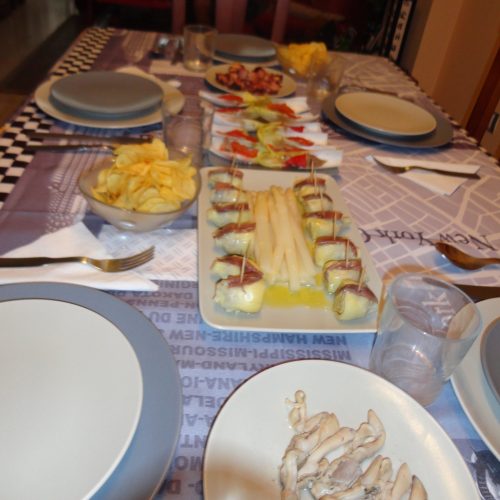 What to Expect at Sunday Lunch in Spain 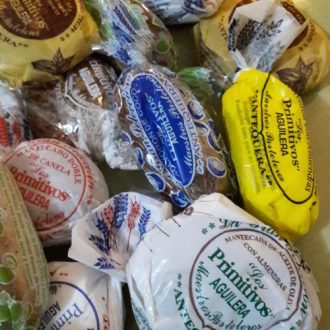