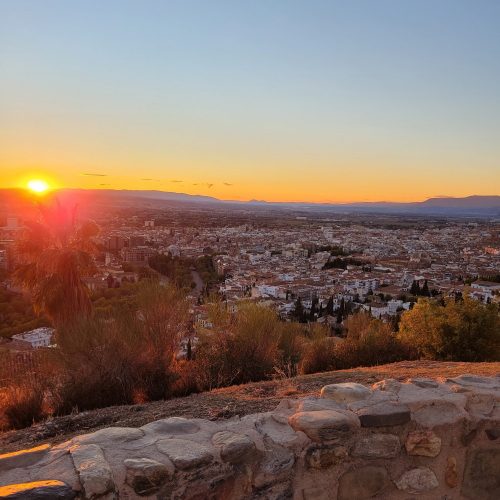 Whether you will be spending just a few short days in Granada or moving to live here long term, we highly recommend checking out some of the city’s countless beautiful lookouts. Between views of the Alhambra, the mountains, and the rest of the city, there’s a lot to see in Granada that is just so picture-perfect and a high up viewpoint overlooking it all is the way to go.

In Spanish, we call this kind of viewpoint a mirador and there are dozens of both well-known and more hidden miradores to be found throughout the city. While we always recommend simply wandering, getting lost in the quaint Albaicín neighborhood, and finding your own favorite lookout by chance, here are just six that we think are worth seeking out intentionally.

Of course, what’s ‘traditional’ is relative, but by this grouping we simply mean that these are the miradores that will offer the view of the city that is most popular. When you look up photos of Granada, the first line of images always include shots of the Alhambra with the mountains in the background, maybe some white buildings in the foreground, and that’s essentially what this list of lookouts will provide you with.

No list of Granada miradores would be complete without including San Nicólas. Many locals will argue that this viewpoint has become far too popular and overhyped. It is often crowded with international tourists and Spaniards alike and getting the perfect shot you’re envisioning—

especially if it’s at a popular time of the day, like sunset—can take a long time as people crowd around the ledges to take photos or just to sit and enjoy the view for long stretches of time.

Even though it’s not as quiet and quaint as you may think from the perfect photos you’ll see on travel blogs and Instagram accounts, there is still something quite special about the Mirador de San Nicólas that keeps us coming back and sharing it with our visitors. This viewpoint is home to one of the larger plazas and you’ll often find ‘hippies’ selling homemade jewelry and alternative- and flamenco-loving musicians alike putting on impromptu concerts. San Nicólas is far from being a “hidden gem” but we would still consider it a must-see stop in Granada. 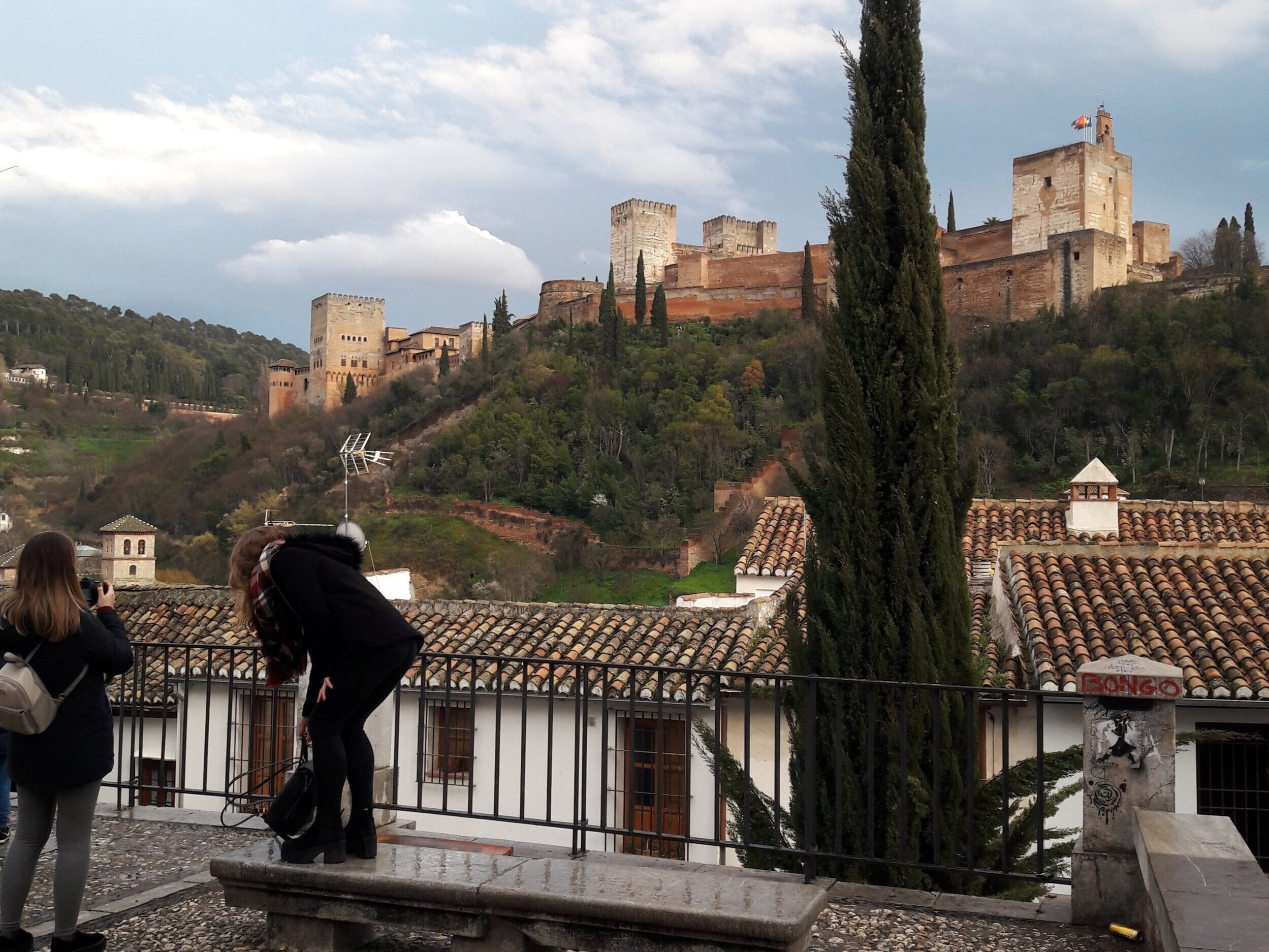 Either on your way up/down to San Nicólas, or as an alternative if big crowds really aren’t your thing, we would also recommend checking out Mirador de los Carvajales. This lookout point offers a similarly impressive view of the Alhambra with far fewer crowds.

It’s true that this mirador is lower down and closer to the Alhambra, so you won’t get the “full package” with the mountains peeking up behind the famous building, but it’s a reasonable trade-off, seeing as you won’t have to fight as much for your spot along the railing to take a close up with the Alhambra. It’s a smaller plaza, for sure, though, so there’s less entertainment in general. 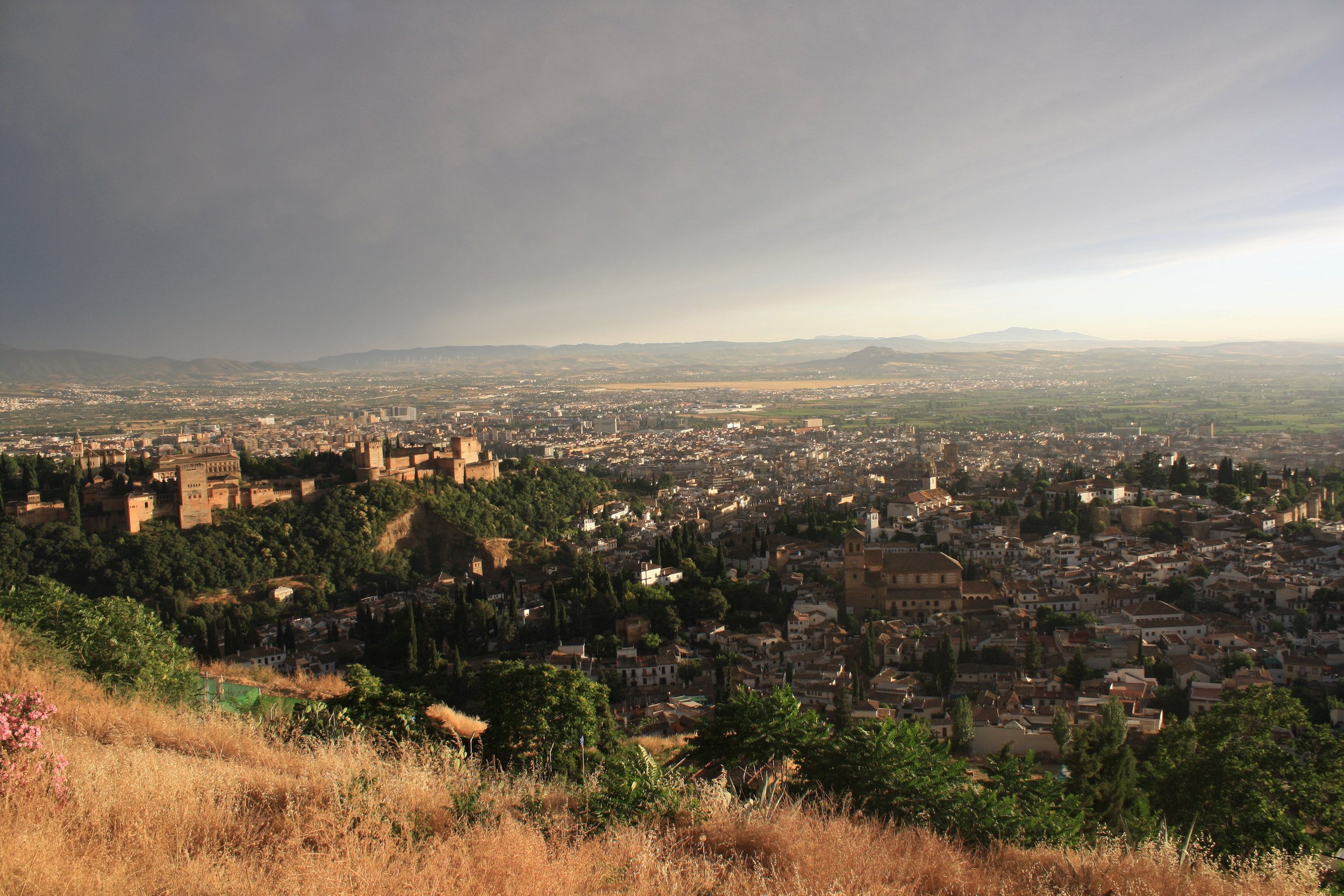 Finally, the viewpoint that provides a ‘traditional’ view of the city, meaning that you can still get shots of the Alhambra, but is definitely the least touristic would be San Miguel Alto. Although GoogleMaps claims it is only about a forty-minute walk from the city center, be forewarned that it is a real uphill trek!

Either pack yourself a backpack with some water and treat it as a mini hike or consider taking the N9 bus or driving to reach this one. San Miguel Alto is a popular choice among the university-aged locals and is a great place to hangout for a while with a picnic lunch or some beers at sunset.

Being the ‘alternative’ options, these miradores offer something different. They are generally smaller, harder to find, and won’t include the coveted Alhambra in the view, but they are special and worth the trek anyways. Still, if you only have a very brief time to spend in Granada, we would probably recommend one of the more traditional options. This list includes a bit more about how to reach the viewpoints, too, since it is far easier to get lost on your way to these. As we said, simply going for a walk and happening upon a beautiful view can be the best part of visiting a city like Granada and that’s exactly how Dani found this lookout. While there’s far less to do at this mirador, if you’re going to be in the Albaicín anyways, we’d recommend trying to make it this spot.

Honestly, we would have never called it a ‘mirador’ ourselves as it’s little more than an opening between buildings along a cobblestone street so it’s easy to miss if you’re looking for an actual plaza. Still, while wandering the winding roads, it stopped Dani in her tracks and made her pause to take in the impressive, untraditional view. 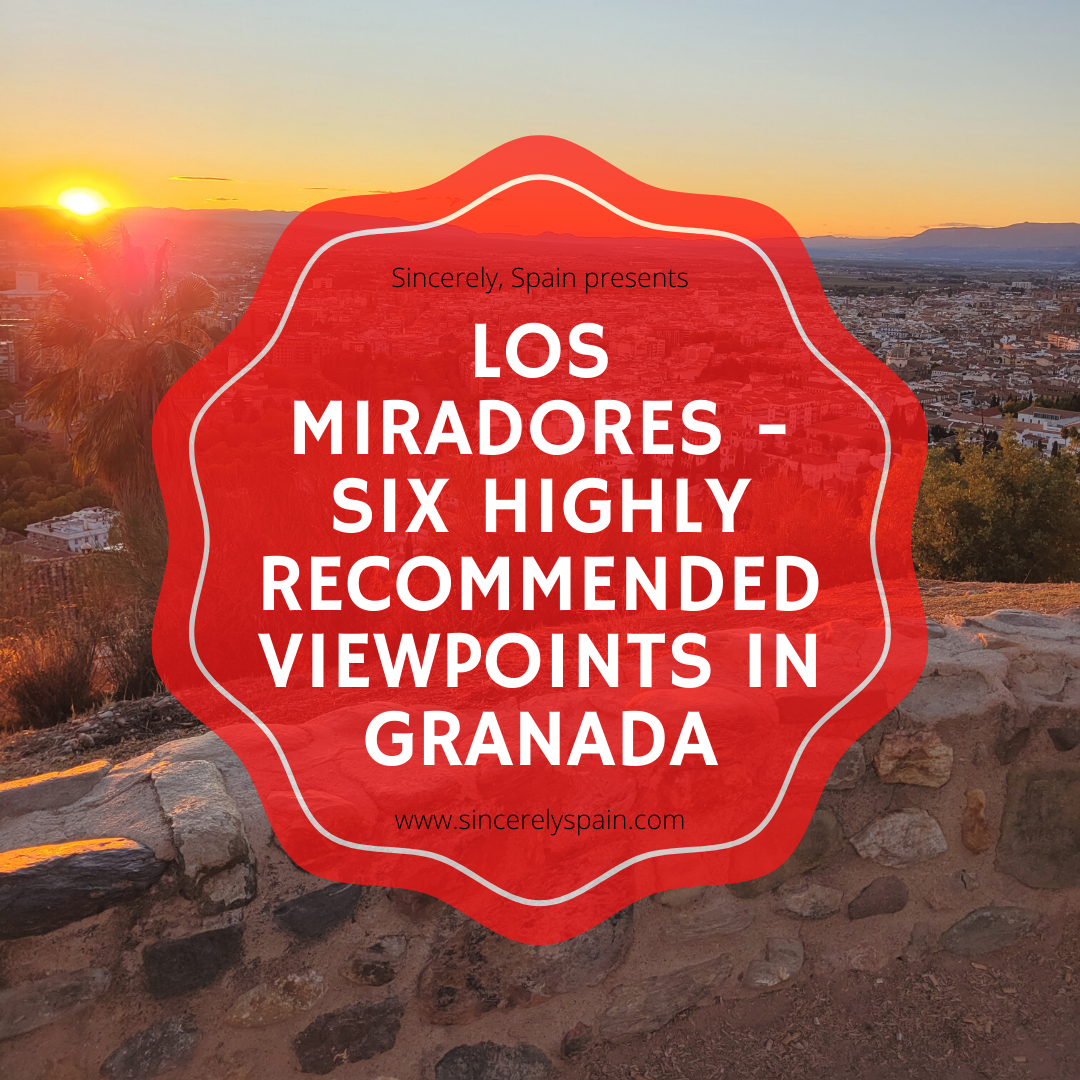 This small, lesser known mirador, at least among non-locals, is definitely a hidden gem as Google’s directions won’t actually help you reach this viewpoint. For both of these last two recommendations, we would recommend going with someone else who has prior experience or allowing for ample time in arriving (especially if you are trying to time it for the sunset).

It would be wonderful if the path that GoogleMaps suggests up from the Gruta Virgen de Lourdes was accessible, but it is not and so you will need to go quite a bit out of your way continuing on Camino Nuevo de Cementerio, up the stairs, and over the bridge onto Avenida Santa María de la Alhambra to circle back. If you arrive at a “off time” you might not even realize that the small steps leading up around the curve of the road by Restaurante Mirador Casa Paco lead to Mirador del Barranco del Abogado, but if you’re walking anywhere near this lookout around the sunset, it’ll be easy to spot as everyone in the area seems to be congregating there to take it in. 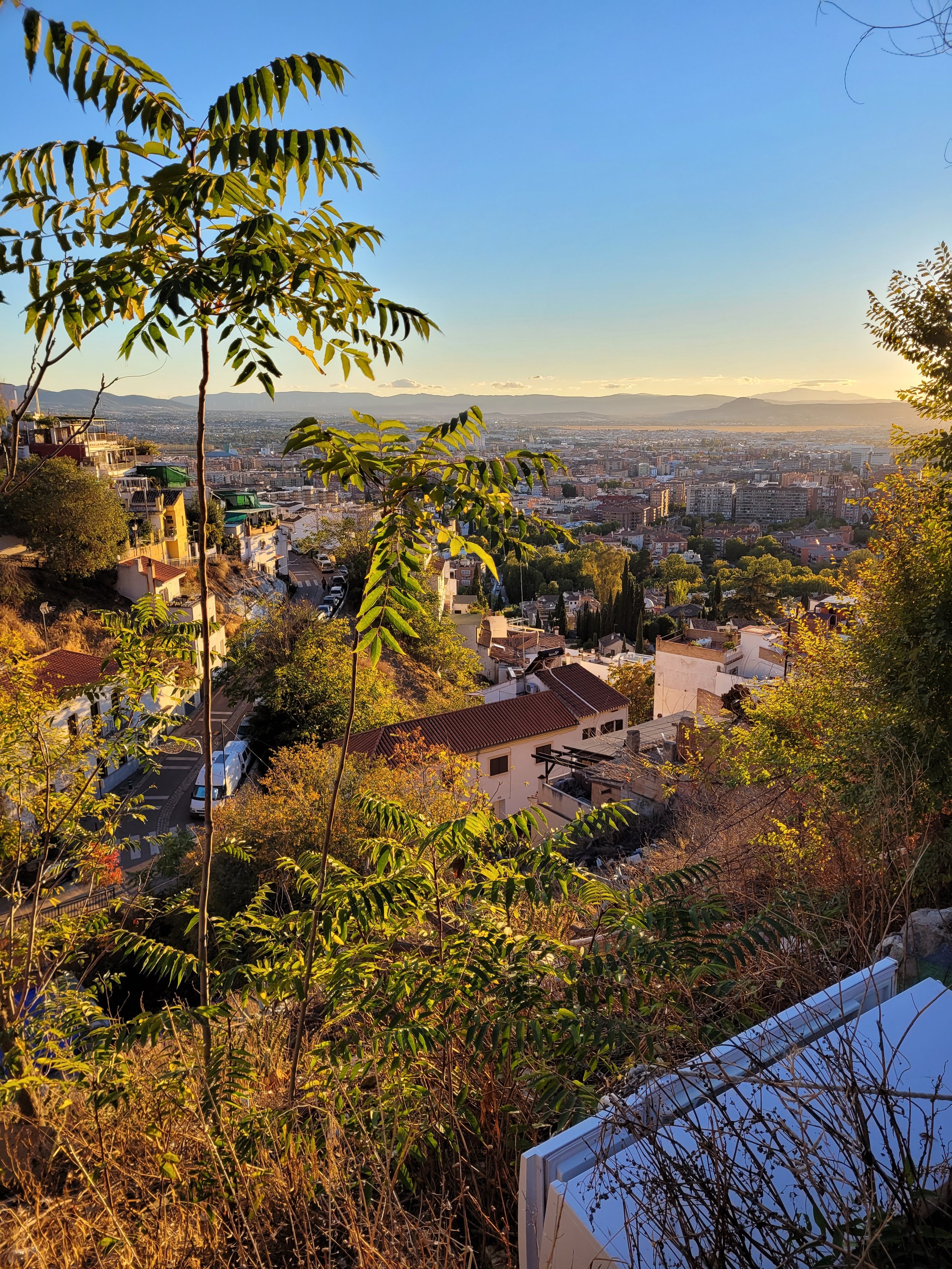 This final mirador is another one that is quite tricky to find without prior experience. If you visit here after Mirador del Barranco del Abogado you’ll likely find yourself climbing through steeply inclining wooded areas and what seems like private property. The better approach would be to reach this viewpoint by going up as if you were headed to the Alhambra entrance and ticket office but instead turning up onward to Paseo de la Sabica.

Mirador Alixares is a fan favorite as it’s not very popular among tourists, yet has the most picturesque (read: ‘Instagrammable’) setting in and of itself. Popular among young granadinos at sunset, this is also a great place to visit and capture some unique photos of yourself, with or without the impressive city view behind you.

So there you have it, a list of six of the miradores here in Granada that we would higly recommend. Have you visited any of them yourself? Do you have a different favorite that you think we should add to the list? Let us know down below. 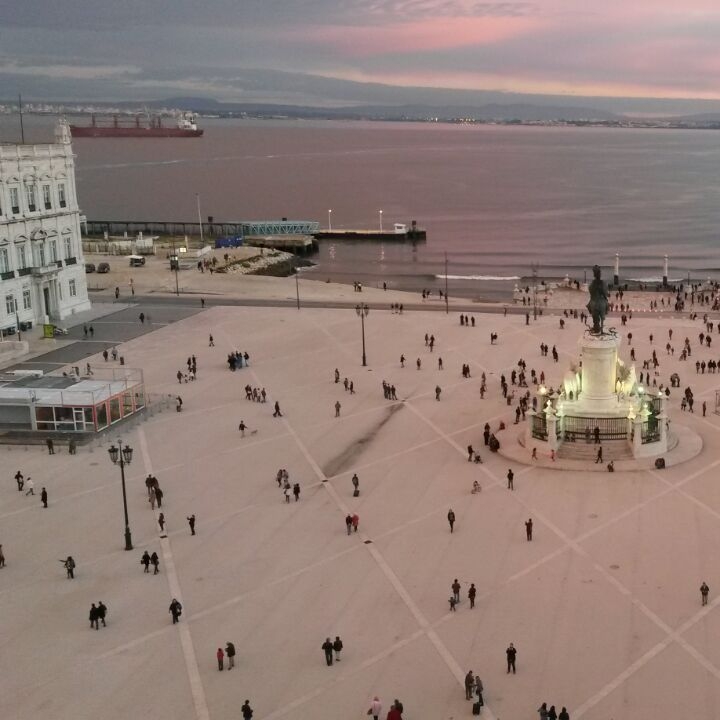 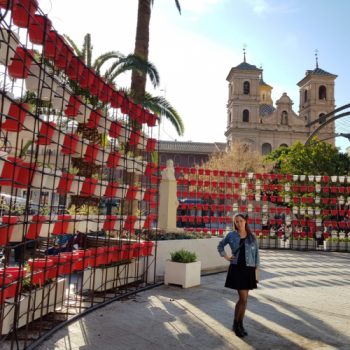 What You Should Know About Murcia 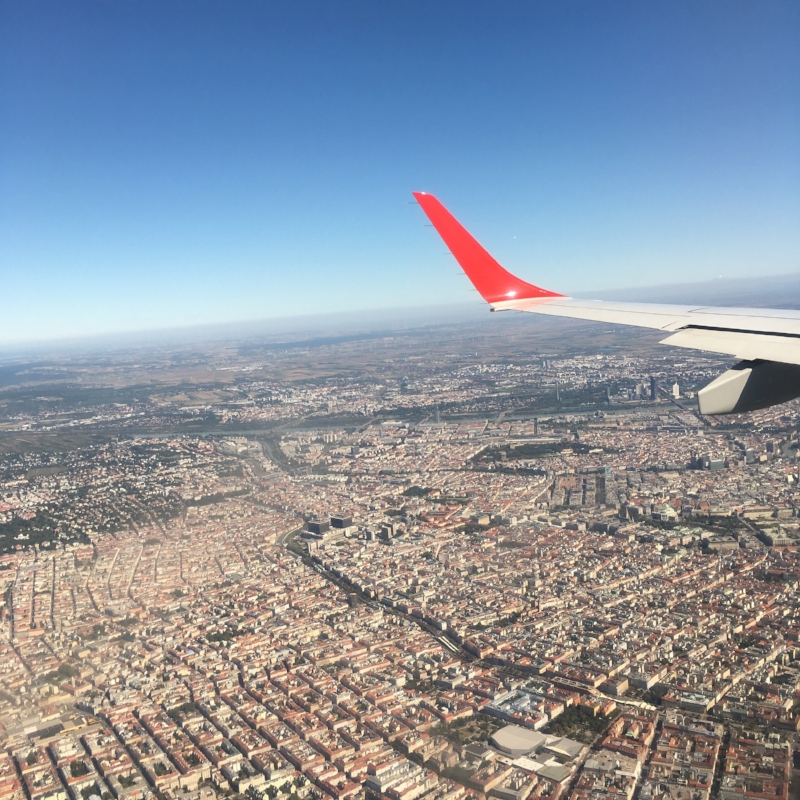