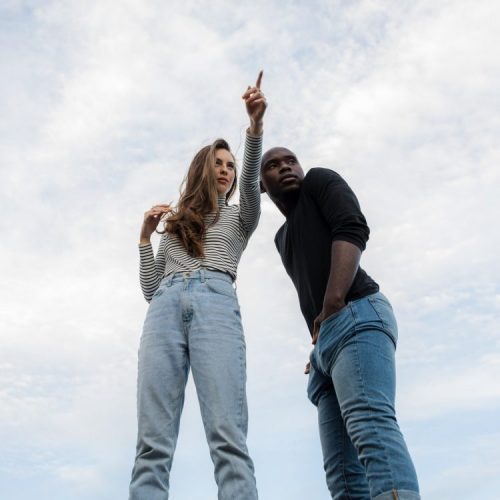 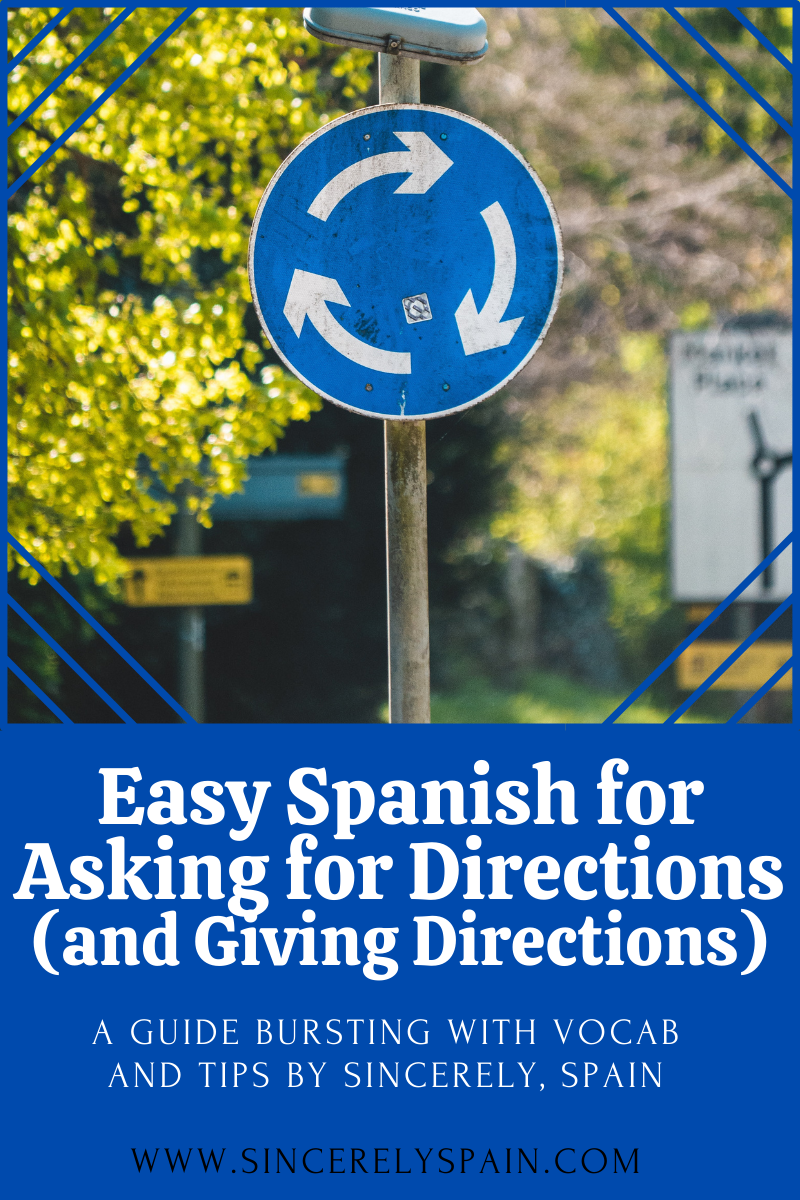 If you will be spending any time in Spain—from a weekend visit to a long-term stay—it’s likely you’ll have to ask someone for directions. Or, if not and you’re super savvy when it comes to navigation, you’ll probably get asked by someone else! Either way, it’s helpful to know some Spanish expressions for these occasions, as well as a few things about how Spaniards ask for and give directions. Here are our insights after a collective decade and half living in España.

The sentences in this guide use the “usted” form and, as such, are more formal. Since you will likely be asking a stranger, it is most correct to use the formal “usted,” but it is also common in Spain to use the informal “tú” when talking with strangers who are not elderly. If you prefer the informal version, all of these sentences can be easily changed such as “¿eres tú de aquí?” and “Disculpa, ¿me puedes decir cómo llegar a [la estación de trenes]? It is common for Spaniards to tell you that you can refer to them in “tú” form, but it is polite to begin in “usted.”

Read more about our experiences in Spain with “tú” vs. “usted” in this post.

If you are having trouble finding a landmark or location, you could use the following expressions to get someone’s attention and ask for directions. The first two are your simplest options.They requires the least bit of speaking in Spanish, but will still imply you are looking for directions:

Disculpe, ¿para ir a [correos]?
Excuse me, to get to [the post office]?

Disculpe, ¿es usted de aquí?
Excuse me, are you from around here?

Perdona, ¿sabe dónde está [la catedral]?
Excuse me, do you know where [the cathedral] is?

Disculpe, ¿me puede decir cómo llegar a [la estación de trenes]?
Excuse me, can you tell me how to get to [the train station]?

Note: This form of the question is used when looking for a specific landmark.

Disculpa, ¿sabes si hay un [parque] por aquí?
Excuse me, do you know if there’s a [park] around here?

Note: This expression is used when you are not looking for a specific landmark (the cathedral, a specific restaurant, etc) but rather a general thing (a park, a restroom, a taxi bank, etc.).

In response, you are likely to receive directions through the following expressions. Or, on the other hand, if you are stopped and asked for directions, here are a few expressions that may come in handy for you: 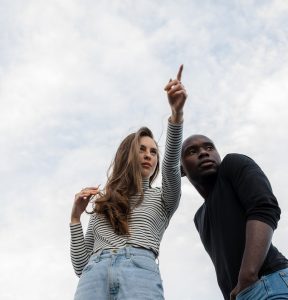 If you need time to collect your thoughts (and recall the following expressions) this is a good phrase to use to buy yourself time. Alternatively, if you want to ensure the person who has asked you knows that you are not 100% sure, it would be helpful to use this same expression but add a “creo que” (“I think”) before giving your directions.

De allí lo/la verás…enfrente a / al lado de / detrás de
From there, you’ll see it across from/ next to / behind

Está enfrente a
It’s across from

A Sample Conversation: How do I get to the train station? 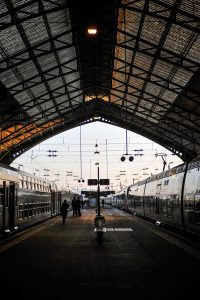 A: Excuse me, can you tell me how to get to the train station?
B: Sure, it’s simple. Look, continue along this street until you reach the Hipercor, okay?
A: Until the Hipercor, okay…
B: From there, turn right and continue for about 500 meters, and you’ll see it across from the hospital.
A: Ah, okay. Thank you very much.

Vocabulary for a few common landmarks you may want to know

A few things to keep in mind

When it comes to giving and receiving directions in Spanish, it’s important to be familiar with the way Spaniards tend to do this. In the US, for example, it’s normal to give directions using the street names (ie. “turn left on First Avenue, then continue until you reach Elm Street and turn right”) but this is not so common in Spain.

Perhaps this is because street names are not as easy to find in Spain—that is to say, all streets have names but these names are not posted regularly with street signs throughout the length of the street. Instead, they are generally posted only on a building somewhere near the start of a new street). As such, Spaniards tend to prefer to use landmarks, outside of the names of the most popular streets.

However, if you will be spending a significant amount of time in Spain (especially in one particular city) it can be very helpful to learn the lingo that is used in the area. What we mean is that the names you see for different areas on a map are not always the names that the locals use.

For example, here in Granada “Puerta Real” is the name of a popular intersection in the center of the city. However, there is a Burger King located in Puerta Real so locals are just as likely to refer to this area as “El Buerger.” This simply means “The Burger [King],” but with the very Spanish pronunciation, it can be a bit confusing to non-native speakers. The funny thing is, many Spaniards will assume that calling it “El Buerger” will help non-locals recognize it more easily (in case they don’t know what “Puerta Real,” which is not signposted, is). However, because of the different pronunciation, it tends to be more confusing for foreigners.

When you ask for directions, simply be aware that you will likely be given indications that refer to landmarks rather than street names so listen out for these keywords. Don’t be afraid to ask for repetition (“¿me lo puedes repetir?” or “una vez más, por favor”) or further clarification such as what side of the street a certain building is on, what color it is, or what else is around it.

Despite having these tips, we understand that you may prefer to use a map rather than ask for directions on the street. If you do opt for a conventional map, we simply suggest that you take a look and map out your route insofar as you can before leaving your accommodations. Most likely, you will have no issues if you pull out a map in the city center, but this is somewhat of an advertisement that you are a tourist and could lead to others taking advantage of you or trying to pickpocket you. Simply be extra vigilant of your belongings while using a map in public.

Pro-Tip: Especially in very touristic places like Barcelona, beware of people who come up to you with a map while you are sitting down! Unfortunately, this is a common trick used to steal wallets and phones that have been left on the table.

If you plan to use a digital map, be aware that this can use up a significant amount of your battery and your data plan—becoming especially costly if you are roaming. Unless you have a data plan in Spain, we recommend downloading a map of the area you will be visiting while you are on wifi. This can be done through Google Maps by searching for the city, then scrolling up as if you were going to read the information. Select the “download” button on the menu that comes up below the pictures.

Pro-Tip: Again, be conscientious if you are taking out your expensive phone in certain areas. We have personally never had a problem and use our phones in public often, but it’s something to be wary of, just as you probably would be in the big cities at home.

A final piece of advice

All that said, if you have the freedom of time to do so, we would encourage you to simply find your own way throughout the city. Unless you have a train to catch or an appointment to make, ditch the maps and simply wander. You’ll be surprised by how many beautiful things you happen upon by chance. Getting lost in the picturesque corners of historic centers in Spain is, in and of itself, a part of the experience. And, when you do decide you need to stop and ask for directions, try to view it as an opportunity. Who knows, you just might make a friend! We certainly did when a similar situation came about all those years ago.

Do you feel more prepared to ask for directions in Spain, now? Let us know if you have any doubts in the comments below. 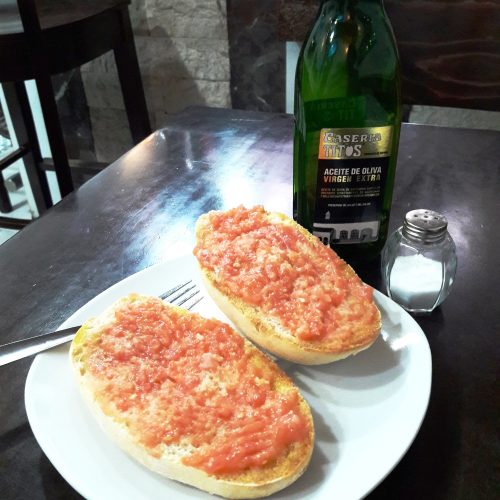 How to: Properly Prepare a Tostada de Tomate 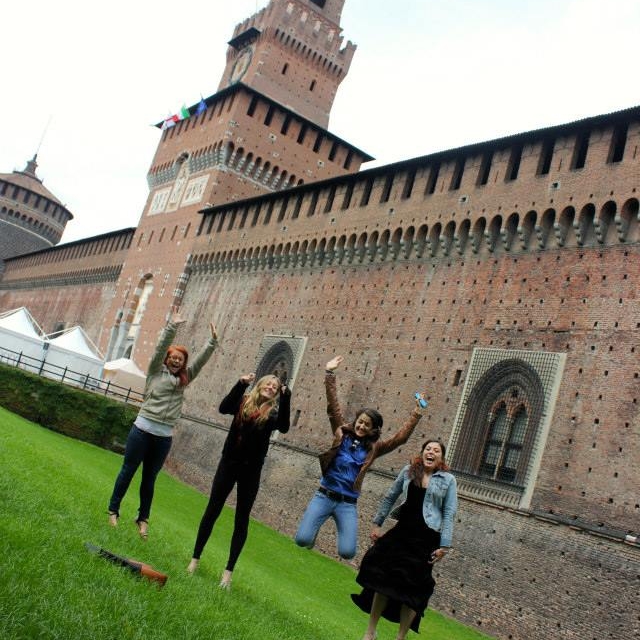 How to: Make the Most of Your Summer Abroad 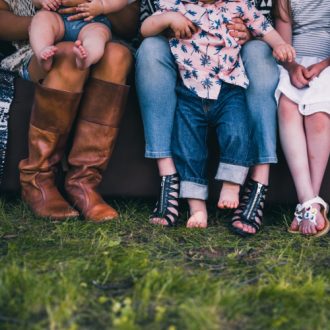